Patrolling Paradise: The Evolution of Enforcement in the Galapagos

The Galapagos Marine Reserve (GMR) is the fourth-largest marine reserve in the world at approximately 133,000 km2. The GMR was formally created in 1998 via the Special Law for the Sustainable Development and Conservation of the Province of Galapagos (LOREG) and extends 40 nautical miles from its baseline around the islands. The islands have unique geographic and geological characteristics and are situated at the intersection of four oceanic currents. This helped produce the unique biodiversity that is found there today, earning them the reputation of a ‘living laboratory of evolution’ among scientists and researchers. Today, the combination of growing tourism and fishing industries, which support the livelihoods of the islands’ inhabitants, also threatens their isolation and biodiversity. The sheer size of the marine reserve, a thriving year-round population of 28,000 inhabitants, and over 200,000 tourists a year pose numerous challenges to the conservation of the archipelago. The primary conservation and management challenges facing the Galapagos marine environment are illustrated by the following:

Seventeen years after the establishment of the GMR, important advances in fisheries regulations and enforcement have been made in terms of patrol fleet size, infrastructure, human resources, and institutional development. The management of marine resources, however, is still a complicated matter, especially due to the constant pressure placed on resources and the need for technical and human coordination in the maintenance of the patrol fleet.

WildAid, in cooperation with partners, is working to make the GMR one of the best-protected marine areas in the developing world. Their ongoing project aims to stop illegal fishing and improve the fisheries management capacity of the Galapagos National Park Service (GNPS). Effective management of the GMR cannot succeed without effective law enforcement and compliance efforts. There is no one ‘silver bullet’ approach to monitoring. WildAid has strengthened the surveillance and interdiction capacity of the GNPS by introducing cutting-edge technology systems while ensuring fast response capacity to intercept illegal fishers once they are identified by the system. The aim is to institutionalize the operation of these systems and establish core operating procedures for all departments involved in the control and vigilance of the GMR.

Patrol Asset Accumulation
Prior to 1998 and the promulgation of LOREG, the Galapagos National Park Service (GNPS) focused only on the management of terrestrial areas and did not have capacity for marine enforcement. It is also important to note that prior to the LOREG, the Ecuadorian tuna fleet had complete access to the archipelago, while after 1998 the industrial fleet no longer had access to one of their primary fishing grounds. Since the creation of the GMR in 1998, initial enforcement efforts focused on the procurement of patrol vessels and equipment, the construction of a marine resources office, and the training of marine park wardens. By 2005, the GNPS procured and received numerous donations for an impressive list of assets: 11 patrol vessels, one floating base, a terrestrial base, and a four-seat patrol plane. GNPS maintenance capacity was not able to keep pace with asset acquisitions, and by 2006 most vessels were in disrepair. The asset accumulation also resulted in more personnel, fuel, lubricants, and per diems required to maintain operations. In order to address some of these issues, WildAid and Conservation International (CI) focused on developing the local maintenance capacity of the GNPS fleet to ensure uninterrupted patrolling of the GMR and on supplying technology to help reduce surveillance costs. Examples of the technologies employed are described below.

Technology Options for Surveillance and Interdiction

opens in a new windowCollaborative monitoring systems require active location transceivers on board of vessels. Location messages include information such as: vessel name, latitude, longitude, course, and speed. A specific regulatory law must be promulgated to obligate vessel owners to purchase and activate on-board transceivers. If the location device is disconnected, the shore stations and control centers will not see the vessel’s position. As law violators tend to deactivate transceivers, regulations must consider stiff penalties for opportunistic tampering by stakeholders. A major drawback of these systems is that they will not detect fishers from other areas or countries which do not employ transceivers. 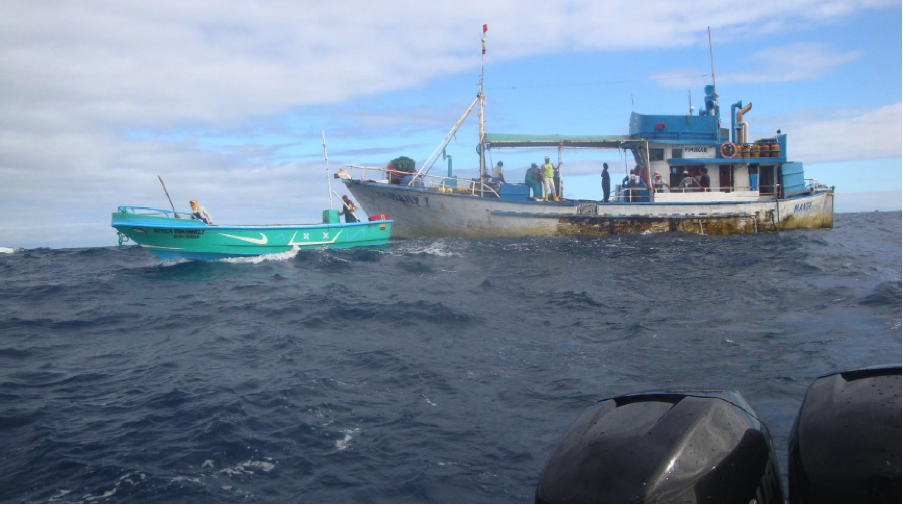 In 2009, WildAid helped implement a Satellite Vessel Monitoring System (SVMS) to track the exact position and speed of all large vessels traveling within the reserve on an hourly basis. In the first year, 32 vessels were apprehended using SVMS and the Rapid Response Patrol Fleet. Photo © WildAid

opens in a new windowNon-collaborative monitoring systems are the best equipment option when detecting vessels that are intentionally carrying out illegal activities in specific geographic areas or in the absence of collaborative systems. Systems are often layered to make up for the deficiencies of one particular technology by using the strengths of another. For example, radar systems often complement AIS systems in order to detect foreign vessels or vessels that have intentionally deactivated their transceivers.

Institutionalizing Operating Procedures and the Maintenance of Vessels
WildAid and partners aim to institutionalize the operation of these systems and establish core operating procedures for all departments involved in the control and vigilance of the GMR. This is very important because the technology and the systems are only as useful as those who are trained to operate and maintain them. Activities include:

The GNPS currently possesses one of the most sophisticated electronic monitoring systems in the developing world and a fleet of fast response vessels to intercept illegal fishers once they are identified by the system. However, improvement has not been linear. Given the political nature of the GNPS, periods of progress have been rolled back due to turnover of directors and key employees. Despite these setbacks, the enforcement of the GMR has improved substantially. As shown on the map, most commercial fishing vessels respect the 40 nautical mile marine reserve. There is not full compliance, however, as some commercial fishers circumvent satellite detection by towing small fiberglass vessels so they can enter the GMR undetected. Regardless of all the technological innovations, vessels are still needed for interdiction. WildAid and partners continue to work with the GNPS to improve vessel readiness, optimize resource allocation, and institutionalize key protocols for efficient operations. Eventually, the GNPS will possess robust systems and highly trained personnel to execute an effective compliance program that ensures the sustainable harvesting of marine resources. This case study was provided by WildAid. For further information please contact: Marcel Bigue at bigue@wildaid.orgcreate new email or opens in a new windowclick here.