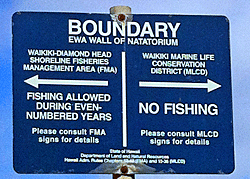 One fishery management strategy is to establish closed areas to fishing, like this rotational closure in Hawai‘i. Photo © Stacey Kilarski

Herbivores, including a range of fish and invertebrate species, are important for supporting coral reef resilience. By grazing on algae, herbivores can prevent macroalgae from overgrowing corals or occupying space important for coral recruitment. Important herbivores include parrotfishes, surgeonfishes, and rabbitfishes, as well as urchins (although urchins can also cause unsustainable bioerosion when in excessive numbers).

Depletion of herbivore populations, especially in conjunction with elevated levels of nutrients from fertilizers or sewage, can shift the balance from coral to algal dominance. ref This change in community structure and composition (e.g., from a coral-dominated to an algal-dominated state) is called a phase shift. Once a phase shift has occurred, it can be difficult for the system to revert to coral dominance as mature macroalgal communities are often characterized by species with physical or chemical deterrents that make them less palatable or digestible to herbivores. Preventing phase shifts by protecting herbivores from over-exploitation (in combination with reducing input of nutrients) is now recognized as a crucial consideration for coral reef management.

Coral reef managers can play a key role in herbivore protection by regulating herbivore removal in marine protected areas (MPAs) over which they have jurisdiction, and by working with fishers and fishery managers to protect the viability of herbivore populations in the wider reef ecosystem. Fisheries legislation can provide important legal frameworks for protecting herbivores, but, in most instances, existing fishery management strategies have not been designed to protect functional roles such as herbivory.

A range of conventional fisheries management tools and strategies are available for protecting herbivores. These include: Management restrictions on the harvest of herbivorous fishes, like parrotfish, can help to maintain a balanced assemblage of algae and coral. Photo © Henry Wolcott 2005/Marine Photobank

In some instances, managers are taking action to increase urchin populations to support reef recovery, especially areas where populations of other herbivores (e.g., parrotfishes and rabbitfishes) have been depleted. For example, in the Caribbean, researchers are assessing the potential of growing sea urchin in labs and relocating them to the wild. In Hawaii, managers have raised and released collector urchins (Tripneustes gratilla) to graze the invasive algae and promote reef restoration.

Other actions have been explored to increase sea urchin populations, such as the building of artificial reefs which provide niches for urchins to hide from predators, and restrictions on fishing of urchin predators (e.g., triggerfish and larger wrasses) which could support the recovery of urchin populations. While a range of urchin enhancement projects have been attempted, the sustainability of these efforts remains in question. ref

While diverse herbivorous reef fishes play a role in reversing coral-algal phase shifts, two recent studies demonstrate phase-shift reversal by an “unsuspected” single species. ref Both studies used large-scale experimentally induced phase shifts on the Great Barrier Reef and the use of underwater cameras to document the species responsible for the transition from macroalgal domination to epilithic algae and coral.

One study ref revealed that the single species, Naso unicornis, was almost solely responsible for the removal of Sargassum biomass. The second study ref documented recovery of the reef (removal of Sargassum) was primarily due to the batfish, Platax pinnatus. The results of both studies reveal the importance of protecting those groups that underpin the resilience of the local ecosystem. Management and conservation strategies may need to look beyond species diversity, and also focus on the maintenance of ecological processes and protection of key species in functional groups.

To control the overabundance of marine algae on coral reefs in Maui, Hawai‘i, the  opens in a new windowKahekili Herbivore Fisheries Management Area was established. It was designed to increase the local abundance of certain herbivorous fishes and sea urchins through fisheries management methods. For example, hatchery-raised juvenile urchins (Tripneustes gratilla) have been released onto the reef to graze the invasive algae and promote recovery of the reef.

Natural controls of marine algae are intended to help the marine ecosystem in the area return to a healthy balance. The management area prohibits the fishing of any fish in the following families: Kyposidae (sea chubs), Scaridae (parrotfishes) or Acanthuridae (surgeonfishes) or any sea urchins.