In recent years, the IUCN has increased its engagement in the Maldives, a group of islands in the Indian Ocean, with the development of the IUCN Maldives Marine Projects program, which aims to support the Government in addressing the environmental priorities and challenges that the Maldives faces. Project REGENERATE (Reefs Generate Environmental and Economic Resilience in Atoll  Ecosystems), a major project under this program, supports the sustainable management of coastal resources in the Maldives, particularly coral reefs, in order to build economic, social, and environmental resilience to the adverse effects of climate change. One major research activity of the project is a two-leg scientific expedition to investigate coral reef biodiversity and resilience and provide baseline ecological data for the Maldives.

The first leg of the expedition, in collaboration with the University of Queensland and the Catlin Seaview Survey, employed high tech cameras to collect data from eight atolls. The second leg of the research cruise was comprised of 17 researchers, representing  universities, research and environmental institutions from around the world, and focused on North Ari (Alifu Alifu) Atoll in the Maldives. The team documented fish abundance and species structure, benthic composition, coral population demographics, coral bleaching and disease, mobile invertebrate species, and foramnifera health. A key strategy of the project was to build local capacity by training citizen scientists in national monitoring protocols. Citizen scientists from Alifu Alifu Atoll, the capital Male and as far afield as Colombo, Sri Lanka, joined the research team, received training, and helped to collect data for their home reef. The data collected will help to assess the resilience of the coral reef ecosystem. It will also help to assess how population density affects reef health. Such assessments address important data gaps in the region and are critical in a country highly vulnerable to climate change, and also dependent on its world-renowned coral reefs and the resources that they provide. This information, combined with data from future monitoring assessments, will inform policy and management decisions in the region.

Reef Resilience (RR): Can you tell us a little bit about how this project came about?

Zach Caldwell (ZC): There was a predicted sea temperature rise this year in the waters around the Maldives. Because we know that corals are more susceptible to bleaching and disease when thermally stressed, this created a timely opportunity to address pressing research questions on the resilience of corals in the Maldives. There seems to be quite a void in quantitative information on coral reefs in the Maldives, so the approach was to organize a comprehensive team to ensure that all necessary information was collected to answer the questions being asked.

RR: What was your role in the expedition? 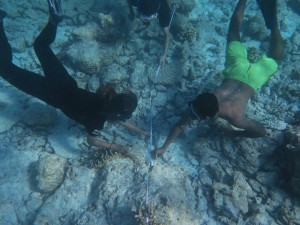 ZC: I was a member of the fish team. I worked directly with three other researchers to count and size reef fishes found along our transect line. I also worked directly with Scripps Institution of Oceanography to collect benthic data. We set up 10m x 10m plots on the seafloor and took a sequence of photos of these plots. The photos were later stitched together to make a detailed map of the sea floor. This provides us with a large permanent record of the community structure in that area at that time.  We complimented these data with fish surveys to compare fish abundance with bottom composition.

I conduct similar coral reef and fish surveys in Hawai‘i to provide our community partners with information on the health of their reefs to help inform community-based management. The Nature Conservancy Hawai‘i is currently working with 19 community partners across the State. As a research team, it’s important that we stay up-to-date on the latest monitoring protocols and also contribute to collaborative research projects like Project REGENERATE.

Amir Schmidt (AS): I had three roles to play during the expedition. My first duty was to make sure that the research team was sampling the right places at the right times. With dozens of divers and three dives per day, we had to stick to a tight time schedule! My second role was to oversee the citizen science component of the expedition. This included four local citizen scientists – two people from an environmental NGO, an assessor for Green Fins Maldives, and a representative from the Environmental Protection Agency Maldives – who helped to collect data on fish and benthic life forms, such as corals, sponges, and algae during the whole expedition and eleven community members and resort staff who joined the cruise for a day, receiving on board and in water training on monitoring protocols focused on benthic communities.

RR: How did the idea  to include local community members and scientists in the expedition come about, i.e. what was your motivation for this aspect of the project? AS: Our goal for including community members in the expedition was to identify who locally is interested in coral reef monitoring, in order to build a network of citizen scientists to monitor our marine resources and later use this information to create a management plan.

Usually we go to the islands and conduct monitoring workshops there. This time, we took advantage of the opportunity to host the workshops on the research vessel. In addition to the training, the community members got to see what daily life on a research expedition looks like. The Maldivian island communities are small and because transportation in between them is limited, interactions of this kind are extremely rare. I think it was interesting for both the community members and researchers, and helped them to see the bigger picture.

Log on to the Network Forum to read the rest of the interview.