Long Island is a densely populated island surrounded by ocean, bays, and estuaries which were once home to robust fisheries. These fisheries have diminished 99% since the 1980s. In 2001, The Nature Conservancy accepted a donation of 13,000 acres of the bay bottom, nearly a third of the Great South Bay, and began an effort to restore the fishery. Despite substantial investments, recurring algae blooms continued to be a serious problem in the restoration effort. Suffolk and Nassau counties have a population of nearly 3 million people, leading to significant influxes of nutrient pollution from sewage. The Nature Conservancy’s work over the past two decades has focused on addressing the source of land-based pollutants and mitigating the impacts to improve the coastal marine habitat. An algal bloom in the Great South Bay in 2017, the year Long Island experienced the most intense brown tide to date (>2.3 million cells/mL). Photo © Chris Gobler

The Since the early 2000s, TNC’s work on nutrient pollution in Long Island has included four distinct yet connected action areas, each building upon each other.

Science: Identifying the source and scale of the problem
In order for shellfish restoration to be successful, the source of the pollution needed to be addressed. TNC hired scientists at the Marine Biological Laboratory at Woods Hole in Massachusetts to conduct a Nitrogen Load Model for the Great South Bay waters. The results revealed that septic systems were responsible for 70-80% of the nitrogen pollution, refuting previous assumptions that stormwater runoff was the primary cause. At the time, Suffolk County had over 370,000 homes reliant on onsite wastewater treatment systems (OWTS), typically cesspools or septic systems. Many of these were outdated and, when functioning properly, remove most pathogens but not nutrients. This study also revealed that nutrient pollution is a threat to Long Island’s ecosystems and is also contaminating drinking water. Improving water quality became an urgent issue. 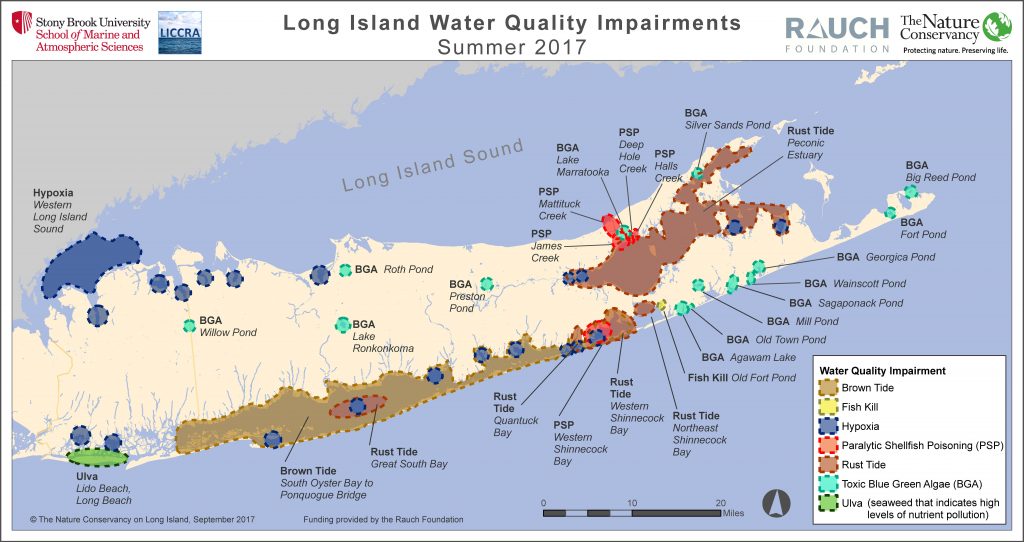 During the summer months (May-August, 2017) nearly every bay and estuary along Long Island experienced harmful algal blooms and/or hypoxia due to nitrogen loading from sewage waste. Photo © The Nature Conservancy

Communication: Creating a compelling narrative
Once the source of pollution was identified, educating policy makers, elected officials, homeowners, and the general public became the focus. Polls and focus groups were set up to determine the best stakeholder communication strategies, bring awareness to community concerns, and identify opportunities for action. The awareness efforts included elevating the urgency of these issues without creating fear. Additionally, we worked with elected officials and decision-makers to develop funding and policy initiatives in support of nitrogen-reducing infrastructure. This bar chart was created to raise awareness among Long Island communities about nutrient loading from septic systems leaching into groundwater, with potential human health risks. Photo © The Nature Conservancy

Government Relations: Getting appropriate funding, policy, and regulations into place
Policy and funding mechanisms to address the nitrogen pollution problem did not exist when this issue was brought to attention, requiring activism to make local and state agencies aware of the scale and urgency of the problem. Ad campaigns and repeated messaging were used to create momentum for passing legislation and regulation for improvement to wastewater systems. In addition, focus was placed on establishing funding streams such as the Suffolk County water quality investment fund. These efforts gave way to the unanimous passing of legislation that required installing nitrogen reducing OWTS in new homes in Suffolk County in October 2020. The messaging triangle was created after focus group sessions clarified what mattered most to local residents about their water. Photo © The Long Island Clean Water Partnership

Implementation: Begin to replace old septic systems with nitrogen-reducing systems
Nitrogen reducing OWTS have been used effectively for several decades and are, in theory, relatively easy to install and operate. However, upgrading failing septic systems with new systems (like the Fuji Clean system) is more complicated than anticipated. Health code updates and new system approvals were needed, as was education for skeptical builders and installers unfamiliar with the technology. Architects, engineers, and regulators also needed to be included and key decision-makers were invited to tour locations in Maryland, New Jersey, and Connecticut where these systems are in use. Officials gained increased understanding of the function, costs, and implementation of these systems, which enabled supply chain and usability challenges to be addressed, ensuring timely and effective installation of both the Fuji Clean and Hydro-Action systems throughout the county.

Science and Communication
The Long Island Clean Water Partnership started with five founding member organizations and has since expanded to include nearly 100 partner organizations. Thousands of experts from partner organizations contributed energy, ideas, and resources. Since its inception, media coverage and promotion of this project has skyrocketed, with almost weekly newspaper articles and cable news features. Public awareness of nitrogen pollution and associated water quality challenges is now widespread. Government Relations
On March 17, 2020, the Suffolk County Legislature unanimously approved the State Environmental Quality Review Act (SEQRA) Statement of Findings for the Final Generic Environmental Impact Statement for the Suffolk County Sub-watersheds Wastewater Plan (SWP). The statement “recognize(s) nitrogen discharge from onsite wastewater sources represents the single greatest factor that can be managed to restore and protect our waters from the impacts of nutrient enrichment-related water quality degradation.” This landmark nitrogen pollution reduction plan has recently been approved by the NY DEC to reduce nitrogen pollution in NY State, opening the doors for more funding and resources for remediation work on Long Island and beyond.

Implementation
As of October 2020, over 1,500 old systems have been replaced with systems that more effectively remove nitrogen. Innovative systems, such as the piloted designs developed at the New York State Center for Clean Water Technology, are still being developed and tested, showing promising results. Upgraded systems using shallow leach fields can prevent approximately 95% of nitrogen from wastewater effluent from entering the watershed and allow groundwater aquifers to recharge, rather than discharging it into the ocean. These technologies prevented approximately 21,800 pounds of nitrogen from entering surface waters during the first year of operation.

Additionally, in October of 2020 the planned $19.6 million upgrade to the Bay Park Wastewater Treatment Plant was completed. The plant, originally built in 1945, was heavily damaged during Hurricane Sandy and was a major source of nitrogen pollution in Nassau County. The system is currently operational and removing more than 40 percent total nitrogen from wastewater, meaning an additional 5,000 pounds of nitrogen is no longer being discharged into Reynolds Channel. The plant currently treats 50 million gallons per day of wastewater on average from more than half a million Nassau County residents. 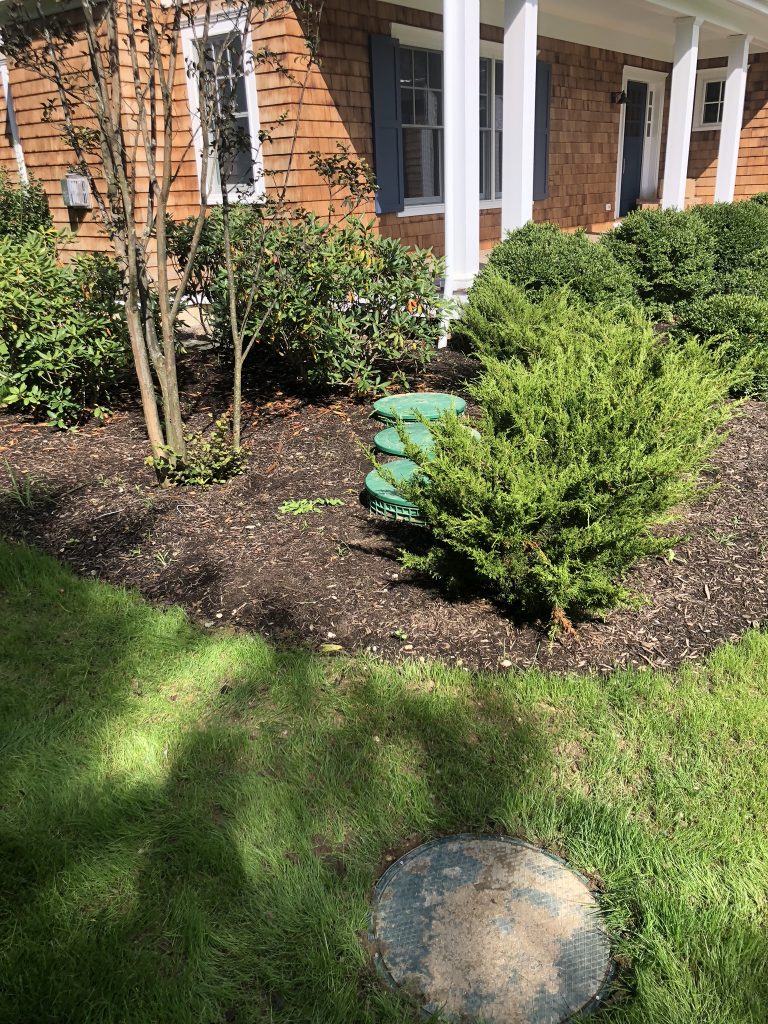 An installed Fuji Clean system at a private home including a pump installed on the outside of the house and lids to cover the tanks. Photo © Chris Clapp

Do the science. Data collection, mapping, and modeling identified sub-watershed level nitrogen sources. This also helped allay fears about adopting a “one-size-fits-all” solution and helped the public understand the scope of the problem.

Systemic change is required. To address the problem, an entire system needed to be changed, including allowing the system to adapt. This is a decades long effort and patience is required.

Community relationships are necessary for success. Understanding community-members’ concerns, what is important to them, and what they are interested in helping with, keeps the issue relevant and engaging. Focus groups and opinion polling were important tools for success.

Failures are an opportunity to learn and move forward. Team members on this project made a hard push in 2013 to pass a statute that would limit nitrogen in effluent to 1mg per liter of water throughout the state, but there was not enough consensus among developers, the real estate industry, and farmers and the bill failed. However, this effort helped get the issue of sewage pollution on the radar statewide, and in 2015 the governor of New York approved the Long Island Nitrogen Action Plan, with $5 million in funding.

Effective communication is key. Team members invested considerable resources in building and promoting key messaging targeted to specific demographics. Using a “message triangle” that centered on the threat of nitrogen pollution and focusing on how that threat could be mitigated, they were able to change the narrative on Long Island, inserting the concept of “nitrogen pollution” into the media’s regular repertoire.

It is possible to replicate this work for less money. By sharing strategies and results, building off lessons learned, and collecting stories, other places (such as Connecticut) have been able to create change and problem-solve with a far smaller budget. It’s always more expensive to do something for the first time, but that investment can create a blueprint for others.

Funding is critical to making change at scale. To finally bring this work to scale, a dedicated funding stream worth about $70 million a year could replace all the polluting residential systems in less than 20 years. Once that consistent funding stream has been created, 7000 systems are expected to be replaced annually. Additionally, legislation requiring installation of clean water septic technology upon the sale of a home could more than double the rate of installation.

Suffolk County:
$500,000 grant from IBM’s Smarter Cities initiative. Verified water quality was critical to the region’s viability and tourism and it was currently under threat from nutrient pollution.