Chumbe Island is a small coral island in East Africa just west of the island of Zanzibar, Tanzania. Chumbe Reef has been well recognized as one of the most diverse in all of Africa, and is believed to host 90% of East Africa’s hard coral species, as well as 425 reef fish species, the critically endangered Hawksbill Turtle (Eretmochelys imbricata) and the endangered Green Turtle (Chelonia mydas). The island’s coral-rag forest also possesses numerous rare, threatened and endangered species, such as the Aders’ duiker antelope (Cephalophus adersi), Coconut crab (Birgus latro), and various species of birds, trees and reptiles.

The western reef of Chumbe Island has been traditionally closed to fishing due to its proximity to the shipping channel between Zanzibar and mainland Tanzania. However, overfishing and destructive fishing practices such as dynamite fishing, smashing corals to encircle fish in nets, and beach seining are common in the region. With rapid population growth and the advent of mass tourism in Zanzibar, coral reefs are under pressure from overfishing, poaching and the use of illegal fishing methods. The situation at Chumbe Island is not uncommon for developing countries in the tropics: insufficient capacity for effective marine governance and enforcement, poverty, and lack of alternative livelihoods make it difficult to balance a sustainable environment and a sustainable community.

Recognizing the high level of biodiversity in both reef and forest habitats, Sibylle Riedmiller, a conservationist and former aid worker, spearheaded the establishment of the uninhabited island and surrounding marine habitat as the Chumbe Island Coral Park (CHICOP) in 1992. The focus was to create a marine park where profits from tourism would help support conservation and environmental education. Ms. Riedmiller further realized that in order to take fishing pressure off of the reef ecosystem, she could offer local fishermen employment as park rangers, who would also be trained to educate fellow fishers about the spillover effect of a no-take zone that would benefit them by restocking over-fished adjacent fishing areas and thus increase catches.

Today CHICOP includes the fully-protected, 30-hectare Chumbe Reef Sanctuary (including coral reef, pelagic, coastal shallows and intertidal habitats), a 22-hectare coral-rag forest reserve (Closed Forest Habitat), a visitor’s center, a small eco-lodge, nature trails, and historic ruins. Any extractive uses such as fishing, anchoring, and the collecting of specimens (even for research) are prohibited. Recreational and educational activities such as swimming, snorkeling and underwater photography are permitted. The mission statement for Chumbe Island Coral Park is:

“To manage, for conservation and educational purposes, the Chumbe Island Reef Sanctuary and the Forest Reserve. This is also supported by eco-tourism activities which are directly related to the non-consumptive uses of the natural resources.”

CHICOP has become a successful ecotourism destination and an internationally recognized conservation success. As of 2013, the Park employs and trains 41 local people from Zanzibar (93% of total staff) for positions such as park rangers, guides, and hospitality workers. The rangers and guides, eight of whom are former fishers, educate fishermen about the importance of coral reefs and of a small no-take zone as a breeding sanctuary for fisheries. As a result, CHICOP has been able to demonstrate that protection of the Chumbe reef helps restock overfished reefs beyond the waters of the sanctuary (1 km) within 3-5 years. Chumbe Island has won many prestigious international awards and become a center of exceptional biodiversity and a breeding sanctuary for endangered and rare species. The Forest Reserve is the last undisturbed semi-arid ‘coral rag’ forest in Zanzibar, particularly after successful rat (Rattus rattus) eradication in 1997. With support from the Zoo Munich-Hellabrunn, Flora and Fauna International, and the Chicago Zoological Society, a translocation program in 1999 made Chumbe Island a sanctuary for highly endangered endemic Aders’ duikers (Cephalophus adersi), which are threatened by poaching and habitat destruction elsewhere in Zanzibar. Chumbe also harbors the world’s largest known population of rare Coconut crabs (Birgus latro). Attracted by abundant fish in the reef sanctuary, rare Roseate terns (Sterna dougallii) bred on Chumbe in 1994 and 2006.

Another outstanding feature of the Chumbe project is the application of state-of-the-art eco-architecture and eco-technology in all developments and operations. Rainwater catchment provides shower water that is heated by solar power. Photovoltaic energy is used for lighting, refrigeration of food and drinks, and communication. Composting toilets eliminate sewage and save precious water, while vegetative greywater filtration cleans shower and kitchen water before it is released. Water pollution is also minimized through biodegradable soaps and cleaners. Organic waste is composted and reused in the composting toilets, while other waste is removed from the island, and laundry is washed off the island. Guests are given solar torches for walking to the restaurant at night to avoid light pollution and protect feeding and breeding patterns of nocturnal animals. 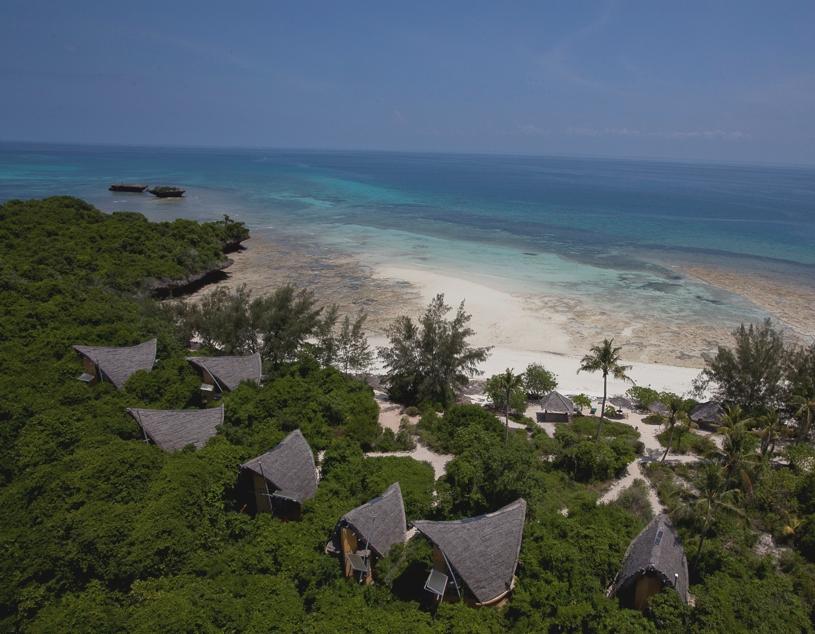 The eco-lodge on Chumbe Island. Revenue from eco-tourism activities is channeled back into conservation, education and research. © Chumbe Island Coral Park

According to the Chumbe Island Coral Park’s Conservation and Education opens in a new windowStatus Report 2013opens PDF file  (pdf), numerous biological, socio-economic and educational successes have been observed by Park staff and management, and acknowledged by the conservation community, the Government and people of Zanzibar. CHICOP has offered one-day school excursions to Chumbe Island to more than 5600 students, 980 teachers and 346 community members and government officials since the establishment of the Environmental Education (EE) Program in 2000. Field excursions to the island provide hands-on experiences for students and teachers in marine biology, forest ecology, and conservation. The following educational outcomes have been reported in the CHICOP’s 2013 Status Report:

Socio-economics
Long-term staff have noticed an increased awareness after years of educating fishermen about the benefits of protecting coral reefs. Park rangers have also reported a decrease in poaching and trespassing, with less than 50 incidents per year since 2008, as opposed to as many as 170 per year in 1994.

Within the Chumbe Education Program, CHICOP strongly supports Education for Sustainable Development (ESD), which is a lifelong learning process. Through ESD, CHICOP helps students and community members to develop the knowledge, skills, and action competence needed to create and sustain a viable future for human and other living things in Zanzibar and on the planet. Thus the Chumbe Education Program contributes to the Millennium Development Goals, especially on resource management and strategies for addressing poverty.

The pre-operational phase (1991-1998) of CHICOP cost a total of $1.2 million (US). Of this, approximately 50% of the start-up and development costs were funded by the project initiator and main investor, Sibylle Riedmiller; 25% by a variety of small donors for non-commercial components (i.e. baseline surveys, visitor center, ranger training, nature trails, education program); and 25% from volunteers, including individuals and agencies.

Commercial operations opened in 1998. The minimum management costs for running CHICOP are approximately $250,000 (US) annually, which have been fully funded from the proceeds of ecotourism since 2001 (a minimum occupancy rate of 30% is required for this to occur, which has been met and exceeded every year thus far).

opens in a new windowSustaining MPA Management and Conservation Webinar

A Private Sector Approach: Conservation Agreements in Support of Marine Protection ( opens in a new windowpdf)

The Effect of Fully and Partially Protected Marine Reserves on Coral Reef Fish Populations in Zanzibar, Tanzania ( opens in a new windowpdf)

UN Secretary General, Report to the General Assembly on Protection of coral reefs for sustainable livelihoods and development ( opens in a new windowpdf)