Stretching almost 350 km along the southwestern coastline of Madagascar is the Grand Recif barrier reef system, consisting of a barrier reef and fringing and inner lagoon reefs. Andavadoaka’s coastal waters boast a diversity of fish and coral species and draw fishers and increasingly, tourists. In the Velondriake area, some destructive fishing practices such as fish poisoning and the use of illegal nets, threaten the health of coral reefs and fisheries and the local way of life. With the successful implementation of fishery closures for octopus, the community implemented greater marine resource management. Along with local partners, the Velondriake locally managed marine area (LMMA) was established in 2006. Although the LMMA bans destructive fishing practices, compliance and enforcement were lacking. The Velondriake Committee of elected representatives from each of the participating 25 villages is responsible for the overall management and enforcement of the local laws. The local people depend on reefs for food and their livelihoods. With a growing population, the future health of these resources is critical. To address this threat, Rare and Blue Ventures launched a social marketing campaign from 2009 to 2011 to raise awareness about the ban on illegal fishing and improve compliance. Rare campaigns use innovative marketing and messaging to achieve the conservation goals of the project.

Behind Rare Pride Campaigns
Rare’s signature Pride campaigns aim to change knowledge, attitudes and behavior by using proven social science methods and innovative delivery methods. The campaigns are successfully implemented at the local level by first planning campaign objectives, selecting a flagship species and carefully researching the target audiences. Rare Fellows, who run the campaigns, follow a “theory of change” model for the project that is tailored for the target community. This model identifies the benefits of, and barriers to sustainable behavior. A substantial portion of the project takes place early on in with the site assessment process. Working closely with the community, local staff collect baseline information through stakeholder workshops and surveys. This helps design a community-specific campaign and set specific measurable objectives for the project.

Rare campaigns set conservation targets for their projects. For the Campaign for Sustainable Fisheries Management Andavadoaka Coast, the target was to increase fish biomass, fish diversity and CPUE (catch per unit of effort) from the site to within 5% of values from a control site by using safer fishing practices and following the rules of the LMMA. The campaign aimed to change local attitudes about community responsibility for enforcing regulations and to raise awareness about unsustainable fishing practices such as using small mesh nets and poison fishing which kill juvenile fish and destroy nearshore marine habitats. The target audience was local leaders, boat owners, beach seiners, and the communities living along the coast. The campaigns are designed jointly by Rare and their on-the-ground partner who receives training before the campaign and continuing support throughout the campaign from a Rare campaign supervisor.

To better understand the issue, local Blue Ventures staff, led by Rare Fellow Gildas Andriamalala held a series of focus group meetings and one-on-one discussions with fishers. A pre-campaign survey (see Resources section) was also conducted to collect baseline information about the community’s knowledge, attitudes, perceptions about marine resource use and local marine laws and the target audiences’ barriers to behavior change. Also, information was collected to determine the types of communication that would be most effective in the community.

A number of communication tools were used, including messages on the radio, banners, posters, t-shirts, as well as events such as festivals. Vezo Aho, “I am Vezo” is a simple, key message of the campaign, which celebrates local fishers’ self-perception as sea stewards with significant seamanship skills and knowledge. The campaign title was “stop beach seining and poison fishing in the Velondriake area”, and the by-line is “the sea is my heritage and that of my descendants.” To effectively reach the fishers and local community members, the message was taken out to sea. The Vezo Aho logo painted on more than 150 sails on local pirogues (dugout canoes) serve as traveling billboards to spread the message of unsustainable fishing and what can be done to lessen this threat. Radio spots featured local fishers who described the importance of marine resources to their livelihoods. A total of 900 t-shirts and 600 posters were also distributed. 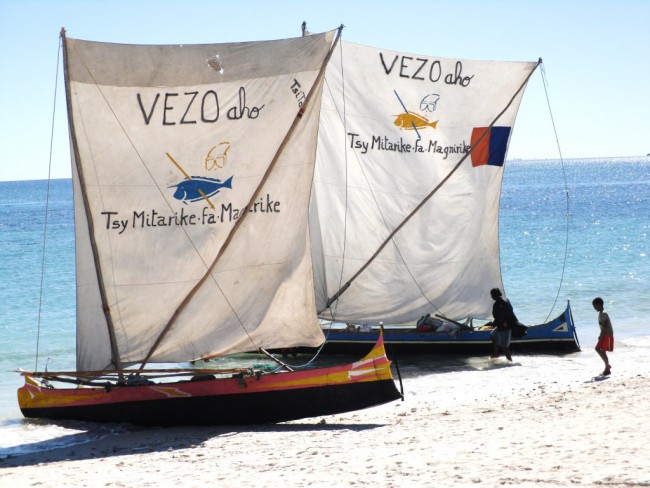 Rare Pride campaigns conduct project-specific monitoring techniques based on the type of information that is needed to assess objectives at each site and within funding limitations. Three types of data were collected:

After one year of implementation of the campaign, results showed: Direct costs to run the campaign were $40,000 US co-funded by Blue Ventures and Rare.