Many developing countries are facing interconnected challenges of poor health, unmet family needs, gender inequality, food insecurity, environmental degradation and vulnerability to climate change. One such country is Madagascar, where 92% of the population lives on less than US$2 per day. Semi-nomadic fishing communities along the southwest coast are some of the poorest and most isolated in the country; almost wholly reliant on the marine environment for food, income, transport and cultural identity. In recent years, they have observed declining fish catches, owing largely to pressure related to market-driven exploitation, as well as increasing subsistence demands from the growing coastal population. In response to this decline in catch, initiatives to diversify livelihoods and as such reduce fishing pressure have been taken by many of the communities with the help of non-governmental organizations (NGOs). One such alternative income that has been explored in the region is sea cucumber farming.

In an effort to protect marine biodiversity and sustain traditional fisheries along the southwest coast of Madagascar, opens in a new windowBlue Ventures, an international non-governmental organization, worked with local communities to establish a locally managed marine area (LMMA); networks encompassing temporary fishery closures; permanent marine reserves; and designated aquaculture zones. The LMMA is called Velondriake, which means, “to live with the sea”, and it covers more than 750 km of marine, coastal, and terrestrial habitats. To increase resilience and the recovery potential of the coral reefs and mangrove areas to climate change and anthropogenic pressures, various forms of fisheries restrictions, such as banning destructive fishing methods and introducing permanent no-take zones, have been developed. These were agreed upon by local stakeholders through community meetings attended by representatives elected from each village. The community-based sea cucumber farms in southwest Madagascar were developed by Blue Ventures, in partnership with other NGOs, The Royal Norwegian Society for Development (Norges Vel), and Indian Ocean Trepang (IOT) a local company that manages a sea cucumber hatchery in Toliara and developed the hatchery methods. Toliara is the main town in southwest Madagascar and the fifth largest city in Madagascar. The aim of the project is to provide an alternative and supplementary income to fishing and thereby increase food security and resilience to climate change.

Blue Ventures began piloting holothurian mariculture in March 2007 with the Women’s Association of Andavadoaka. The trials provided the opportunity to test materials and pen design, as well as begin to collect biological data on growth rates and stocking densities. In September 2009, two local NGOs, Blue Ventures and Trans’Mad Development secured grant funding from the Regional Programme for the Sustainable Management of the Coastal Zones of the Countries of the Indian Ocean Countries (ReCoMaP). Funding was used to establish sea cucumber farming as an alternative livelihood for local communities in southwest Madagascar. Both organizations collaborated with a sea cucumber hatchery in Toliara to carry out village-based mariculture of juvenile Holothuria scabra in six villages to commercial size. Depending on season, site and food availability, individuals reached harvest size in 9-12 months. A feasibility study was carried out in 2009 to assess extension of the activity and increasing the commercial focus, profitability and value captured by the producers/farmers.

From 2010 to 2015, the project had expanded to over 40 farms concentrated in 2 main sites where growth and conditions have been most suitable. The main site in Velondriake is based in the village of Tampolove. When the farm was first established in Tampolove, the community was consulted by Blue Ventures, and social surveys were carried out to establish potential farm families. By this time a bond of trust already existed between the community of Tampolove and Blue Ventures, who had been working in the community for several years to establish Velondriake. The sea cucumber farm in Tampolove employed 38 farming teams and over 170 individuals. Each team manageed one pen and over 50% of both team leaders and members were women. Earnings from the farm were split between all the individuals in each farming team. A school farming team was also established, consisting of students, teachers, and parents and profits go towards tuition fees for the children in the community. In 2013 and 2015, cyclones and disease broke out in the area which damaged the farms. As a result, sea cucumber juveniles stocking ceased and in 2016 the project was fully re-evaluated and experimental trials were undertaken. In the same year, the previous model was deconstructed and a new model based on the assessment findings was constructed. The farmers agreement is made in the community where sea cucumber farming is practiced, and there a structure is created at the start of operations that is responsible for development, monitoring and enforcing of the governance systems. This structure is called Zanga (Malagasy word for Sea Cucumber) Management Committee (ZMC) and is composed of a general assembly, an advisory board, and a hired operational body. The general assembly consists of all sea cucumber farmers within the community and also includes the hired operational body which consists of ZMC hired personnel who have responsibilities within the farming model such as supervisors and guards. The Advisory board consists of the President of the Velondriake Association (the local fisheries management body for the LMMA) and a Velondriake Association aquaculture representative, along with a technical expert from the NGO Blue Ventures. The traditional village leaders in the community, the clan chiefs, and the President of the Fokontany (local neighborhood structure) have crucial roles in the legitimacy of any decisions that are made by the ZMC, and ultimately they are responsible for ratifying new regulations.

A lease agreement is established at the level of the ZMC and is the cornerstone of the sea cucumber farming model as it defines its principles and rules regarding all farming activities and ensures that farmers are adhering to best practice aquaculture guidelines. 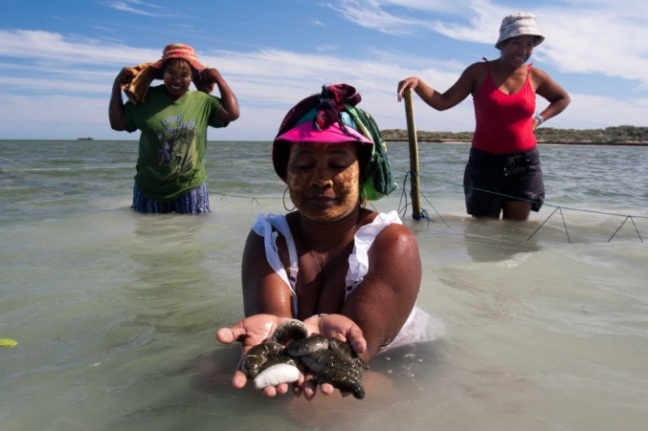 The first sale of sea cucumbers took place in 2009 and net income has been increasing each year, although a decrease in income was seen in 2013 when cyclone Haruna caused large-scale loss of sea cucumbers. Increases in income can be attributed to: new techniques to improve juvenile survival rates (e.g., the introduction of nursery pens), increase in the technical abilities of farmers, and introduction of guards to reduce theft. Following the implementation of these new techniques juvenile survivorship rose from 46% in February 2009 to a peak of 76.9% in August 2011. Since 2017, with the new model in place, based on the assessment and experimental trials findings, farms were standardized in size (900 m2 each) with 2 farmers per farm. The nursery was no longer needed because there was less threat of sea cucumber predators in the area. By carefully ensuring that the carrying capacity of the site is respected, there has been no disease in the new model pens.

After several months of growing in sea pens since the model was reconstructed, the first harvest took place in November 2018. The average net monthly income per farmer reaches US$42 and the average monthly return rate reaches 60%. The model is now more sustainable because the farmers are able to pay all operational costs including the purchase and transportation of juvenile sea cucumbers, as well as the salary of ZMC supervisors and guards. All farmers receive an income after the harvest and selling to a private partner and are never in debt. In addition, the farmers grouped in the ZMC contribute to a community pot which will contribute to the development of the whole community.

The creation of the ZMC and the lease agreement successfully eradicated the occurrence of theft. The fact that the lease agreement was defined by the community and the farmers and that it can be modified by the General Assembly has facilitated its abidance. Farmers are starting to make changes when needed, each farmer can make a change by bringing the necessary arguments. The lease agreement also incorporates a conservation agreement, linking farmers with the LMMA Velondriake and incorporating innovations in terms of conservation such as the designation of a No Take Zone within the sea cucumber farms. In total 8 ha of No Take Zone has been designated. Establishing alternative livelihoods is challenging. It requires collaboration between many partners and building new governance systems within local communities. In addition, communities in this project faced difficult living, financial, environmental, and political conditions.

Results are rarely published due to many aquaculture projects being part of the private sector, and as such, experiences and lessons learned are rarely shared. Blue Ventures has tried to overcome this by sharing their experiences through a range of media and products:

Key lessons learned and recommendations from the project include: Blue Ventures’ aquaculture programme is supported by opens in a new windowNorges Vel, an international NGO with expertise in tropical mariculture development. opens in a new windowBlue Ventures

opens in a new windowIndian Ocean Trepang: a sea cucumber hatchery and aquaculture business that works with communities to provide juveniles for community production

opens in a new windowNorges Vel

opens in a new windowCopefrito: a local seafood export company with a commitment to the sustainable management of Madagascar’s marine resources

opens in a new windowInstitut Halieutique et des Sciences Marines: the marine science and fisheries research institute of the University of Toliara

National fisheries and aquaculture authorities: support the project through the development of a supportive legal framework for aquaculture

opens in a new windowThe Status of Coral Reefs in the Remote Region of Andavadoaka, Southwest Madagascaropens PDF file