Although Hawaiʻi banned the construction of new cesspools in 2015, about 88,000 are still in use across the state. Cesspools are pits that collect and contain sewage. Typically unlined, they don’t actively treat wastewater and are a source of contamination of nearby bodies of water. In Hawaiʻi, cesspools discharge untreated sewage into the environment every day, putting the drinking water at risk in addition to polluting the marine environment. Nearshore ecosystems and coral reefs are vulnerable to influxes of nutrients which can cause disease and algae overgrowth in corals which are also facing bleaching and the effects of overfishing. Several reefs around Hawaiʻi have been categorized as in “dire” condition by scientists. Coral reefs are a major attraction for tourists, and their declining health threatens this economically important industry. Cesspools send an estimated 53 million gallons of untreated sewage into the environment every day in Hawaiʻi.

“That’s shocking when you think about how what they discharge every day is larger than the worst sewage spill we ever had in Hawaiʻi, which was in Waikiki in 2006,” said Stuart Coleman, co-founder of the Hawaiʻi-based non-profit Wastewater Alternatives and Innovation, referring to an incident where 48 million gallons of human waste were discharged into the Ala Wai Canal. “All of the beaches were immediately shut down, it made international headlines. Everyone remembers that. That puts it into perspective when you think that more than that is released every day in Hawaiʻi.” Cess pools are essentially holes in the ground for receiving wastewater, but which offer little to no treatment before wastewater is discharged. From a cess pool, pollutants such as pathogens and nutrients can easily contaminate nearby aquifers and streams, which drain into the ocean. Photo © Michael Mezzacapo

Realizing the urgency, in 2017 Hawaiian legislators passed a law requiring all cesspools be eliminated and replaced by sewer systems by 2050. To meet the 2050 mandate, around 3000 cesspools will need to be replaced annually, but the current pace is far below that, at around 150 per year. One of the complications of this mandate was that it did not specify replacement methods. In Hawaiʻi we are identifying the needed conditions for successfully replacing tens of thousands of cesspools with sewage systems. For instance, solutions need to be tested and proven to work in Hawaiian volcanic soils. The high permeable volcanic soils across the state make many septic systems unsuitable, requiring exploration of novel options. Additionally, the replacement systems need to be affordable.

Hawaiʻi’s building and health code laws need to be adjusted to account for non-traditional systems. New sewage treatment systems will require specialized knowledge from engineers, installers, and maintainers. Fulfilling the state’s mandate of converting nearly 90,000 cesspools in the next three decades could create up to 2,000 new jobs, however.

A Hawaiʻi-based non-profit, Wastewater Alternatives and Innovation (WAI) was launched in January 2020 with the aim of catalyzing the replacement of polluting cesspools with alternative systems that will protect water quality.

WAI helped create a hui, a consortium of partners, to address many of these challenges. With this hui, they are building a statewide jobs program, Work-4-Water, with emphasis on cesspool replacement. The program is working to create enabling conditions for safe, timely, and legal cesspool conversions. Establishing widespread awareness of the problem, new policies and regulations, behavior change efforts, new funding streams, affordable and effective solutions that work under local conditions, and a skilled workforce are major aspects of this program. An additional challenge is that the global pandemic has demanded rapid adaptation to a new political landscape. Funding streams for many projects became scarce and a focus on job-creation is now more critical to the economy. 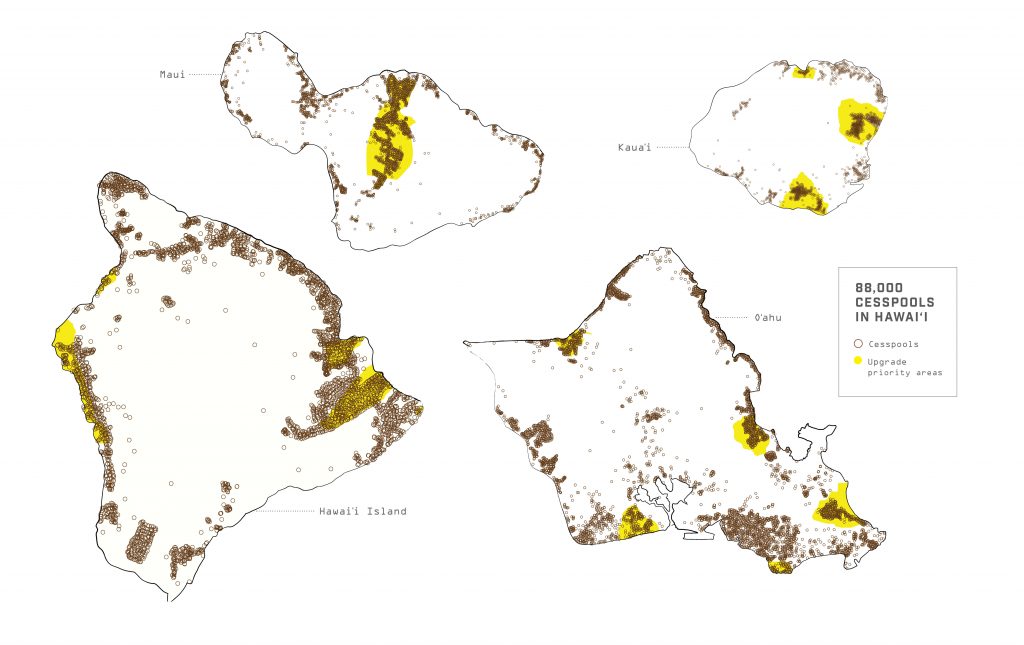 As part of the Work-4-Water program, the University of Hawaiʻi Community Colleges will collaborate with the Hawaiʻi Water Resources Research Center and the State of Hawaiʻi Department of Health to recruit teachers and practitioners to train students and displaced workers for sanitation system installation and maintenance. Classes will provide training for installation, inspection, and maintenance of Individual Wastewater Systems (IWS) and will include certification courses. These pilots will serve as a model for creating training programs for thousands of new workers who will have the knowledge and skills to successfully replace Hawaiʻi’s 88,000 cesspools.

Potential pilot technologies include variations of constructed wetlands as well as nitrogen-reducing biofilters or bioreactor gardens. These passive wastewater treatment solutions, based on research from Stony Brook University and The Nature Conservancy, use layers of sand, wood chips, and biochar to remove pathogens, chemicals, and nutrients from sewage. For areas with shallow water tables, close to the shoreline, or where space is limited, aerobic treatment units can be used. These not only remove pathogens from waste but also reduce nitrates and other nutrients.

WAI is working with the Work-4-Water hui and using CARES Act-funded workers to put together a database of homeowners who are in Priority 1-3 areas (identified by the state Department of Health), where cesspool sewage poses a threat to drinking water sources, groundwater, and sensitive surface waters. The database will also include a list of certified wastewater engineers, contractors, equipment suppliers, and financial resources. As of October 2020, the large-scale cesspool conversion program is still in the planning and development stage and has yet to be implemented. The Work-4-Water hui members are currently doing education and outreach to funders and local stakeholders. The hui is in the process of applying for large federal and state grants to fund the program, including seeking funding from the Department of Labor and the Economic Development Association. The bulk of the funds are anticipated to come from the federal government’s second stimulus package to help with workforce development.

While awaiting funding that will allow efforts to scale up, WAI has 10 current projects in place which are on track for completion before February 2021. Through these projects, WAI is introducing new technology options that could transform traditional sanitation. One example is the WAI pilot project using the Cinderella Incinerator Toilet, a waterless system that burns solid and liquid waste to create pathogen-free, odorless ash. WAI is also working with Cambrian Innovation waste-to-energy treatment that recovers and recycles water for other uses. A Cinderella Incinerator Toilet imported from Norway, installed at the Hawaiʻi Institute of Marine Biology in Kaneohe Bay, September 30, 2020. It produces pathogen-free ash as its only waste product, is powered by propane, and can be used completely off-grid. Photo © WAI

WAI is still learning, facing challenges, and establishing best practices. Stuart Coleman reflects on this, saying “Civic engagement is critical. If you want a solution, you need to surround yourself with people who want solutions. This country was founded by people who agreed with the idea of ‘by the people, of the people, for the people’.”

He offers optimistic encouragement, “Bring the right people together, who can think outside the box.”

In addition to acknowledging the need for ongoing collaboration, WAI projects also demonstrate the incremental nature of change. “Always remind people of the big picture. It’s so easy to get lost in details. We keep reminding people, ‘This is a big problem, it’s not going away, nobody is doing anything about it, and we need to make this happen.’ Remind people why we are doing what we’re doing. It’s all about clean water.” – Stuart Coleman