While invasive predatory freshwater fishes have caused devastating damage to native freshwater species, ref marine invasive fishes are relatively uncommon and their ecological effects are largely unknown. Aquarium releases and ballast-water transport are the two most likely pathways of tropical marine fish introductions in the Caribbean and are likely to be equally important pathways in other regions. ref

Over the last several years, interest in the impacts of marine invasive fishes has increased dramatically due to the introduction of two closely related species of predatory lionfish (Pterois volitans and P. miles) from their native range in the Indo-Pacific to the Western Atlantic. While it is unknown how the lionfish were introduced, research suggests that several individual lionfish were released from an aquarium during Hurricane Andrew in 1992. ref Recent research highlights the impacts of invasive lionfish to coral reef ecosystems in the Caribbean region. Such impacts include decreased survival of native reef animals due to predation and competition, which reduces the recruitment success of native coral reef  fishes.ref

Lionfish have few natural predators in their native range, and therefore there are few native Atlantic and Caribbean species that could act as significant potential predators of lionfish. ref In the Caribbean and Atlantic, natural lionfish predators, like groupers, are overfished and are unlikely to reduce lionfish populations and their associated ecological impacts. 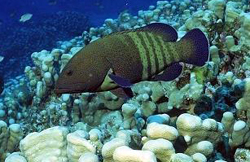 The invasive peacock grouper, Cephalopholis argus (roi), in Hawai‘i. This invasive grouper has become the dominant predator on some reefs in Hawai‘i. Photo © Chad Wiggins

Some researchers and fishers suggest that the introduction of these species has resulted in a decrease in fish abundance and associated catch of other important food fish species. While studies conducted to date have failed to document a strong biological impact on native fisheries in Hawai‘i from the introduction of these species, ref there is still widespread debate on this issue. In response, The Nature Conservancy and the University of Hawai‘i are currently conducting a “roi removal” experiment where all invasive roi have been removed from a series of reefs on Hawai‘i Island and the response of the native fish community is being tracked over time (see opens in a new window results). Several other species were introduced in Hawai‘i, including tilapia (Oreochromis mossambicus), sardine (Sardinella marquesensis), mullet (Valamugil engeli) and goatfish (Upeneus vittatus). The ecological effects of these species on Hawai‘i’s native coastal and marine ecosystems are unknown, although the mullet may be displacing native mullet (Mugil cephalus) in some estuaries. ref

Few studies have assessed the ecological and socioeconomic impacts of invasive marine fishes and studies that have been conducted focused primarily on temperate regions compared to tropical regions. ref Assessing these impacts, as opposed to simply documenting the presence, abundance, and distribution of such species is an urgent research priority.

opens in a new windowBishop Museum and University of Hawaii: Guidebook of Introduced Marine Species of Hawaii