Coral reefs worldwide are facing severe threats that jeopardize their survival and have already led to degradation and destruction in many places. New management actions are desperately needed to ensure reefs continue to exist and recover their structure and function where that has been compromised. Fortunately, scientists, conservationists, and environmental managers across the globe are developing and implementing new strategies to protect and conserve these ecosystems against a suite of local and global threats.

Below are key findings from the Global Coral Reef Monitoring Network’s opens in a new windowStatus of Coral Reefs of the World (2020) report that quantifies the current state of knowledge on coral and algal cover on reefs using global monitoring data from 73 countries and 12,000 sites from 1978-2019. 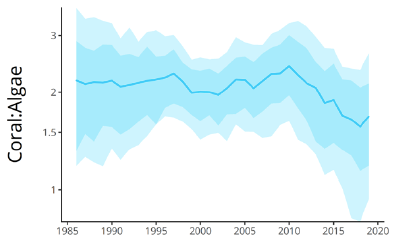 Long-term trends in the average cover of live hard coral in each of the ten GCRMN regions. The solid line represents the estimated mean with 80% (darker shade) and 95% (lighter shade) credible intervals, which represent levels of uncertainty. Grey areas represent periods for which no observed data were available. Trends are coloured to match the GCRMN regions represented on the central map. The proportion of the world's coral reef area supported by each region is indicated by % of coral reefs. ETP is the Eastern Tropical Pacific. PERSGA is the Red Sea and Gulf of Aden. ROPME is the ROPME Sea Area. WIO is the Western Indian Ocean. Source: Global Coral Reef Monitoring Network 2021

Below are key findings from the 2011 Reefs at Risk Revisited report  ref that quantified the current threats to coral reefs worldwide and projected the risk of future degradation.

This map shows a global classification of coral reefs by the estimated present threat from local human activities, according to Reefs at Risk integrated local threat index. The index includes overfishing and destructive fishing, coastal development, watershed-based pollution, marine-based pollution and damage. Global warming and ocean acidification are not included as they are global, not local threats. Click to enlarge. Map © WRI (World Resources Institute)

Increases in Threats to Coral Reefs

It is important to communicate the status of coral reefs on the local level. This information can often be difficult to find or access. For country level information on the threats to reefs you can access the opens in a new windowReefs At Risk website to find reports that include detailed global, regional, and local reef information. This new report presents the results of an analysis of the severity of impacts to coral reefs to compare their relative importance globally and regionally. Risks were categorized by scale of the impact and frequency of the events.

The results will help decision-makers and reef managers understand the relative importance of the risks coral reefs face. opens in a new windowGCRMN Sixth Status of Coral Reefs of the World Report: 2020